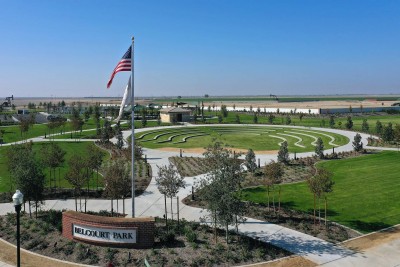 A ribbon-cutting ceremony will be held on Friday in celebration of the opening of the Belcourt Community Park, which cost $2.1 million and spans more than eight acres. Crews have been working on the project since January 2018.
The park includes a large multi-use sports field, tennis courts, an amphitheater and shaded play area, according to the city. The park also includes covered picnic areas, three  large covered play structures, energy-efficient lighting and a restroom building.
“Belcourt Park is a beautiful addition to the City of Bakersfield system of public parks, and represents a unique partnership with Woodbridge Pacific Group and Bolthouse Properties, and with the Belcourt H.O.A., which will maintain and operate this park for the neighborhood and for the entire community,” Recreation & Parks Department Director Dianne Hoover said in a statement.
Belcourt Park is the 60th park within the city limits, she said.
WPG President Todd Cunningham said the new park fits well within the surrounding community and is a natural extension of the development’s aesthetic.
“Our Bakersfield focus groups told us they wanted to live close to work, leisure, community activities, retail and dining,” he said. “This connectivity is a core element of the Belcourt lifestyle.”
Officials with Seven Oaks master developer Bolthouse Properties said they were proud of how the park turned out.
“Belcourt is clearly meeting our objectives for optimized value in all residential communities,” said Bruce Davis, Bolthouse senior vice president of development. “We commend the City and WPG on this latest contribution to the superb live/work/play lifestyle that Belcourt residents enjoy every day.”

See original article at: https://www.kget.com/news/local-news/city-opening-new-park-in-belcourt-seven-oaks-development/
Back to Media Coverage
Copyright 2021 Woodbridge Pacific Group, LLC. The improvements, amenities, information and materials described herein, are intended to provide general information about proposed plans of the developer and are subject to change or cancellation at any time without notice. Renderings and depictions are not to scale, and are an artist’s conception of proposed future development of the property depicted. Home design, materials, features, amenities, and/or prices may change without notice. Land uses are conceptual only, subject to government approvals and market factors. Prior to execution of any agreement, you should obtain and review the California Final Subdivision Public Report and the project documents. No Federal Agency has judged the merits or value, if any, of this property. Equal Housing Opportunity. Models do not reflect racial preference. All square footages are approximate. Woodbridge Pacific Group, LLC is the general contractor and project administrator. All sales activity requiring a California broker license is conducted by Muirlands Real Estate Group, Inc. CA RE License 01949603.