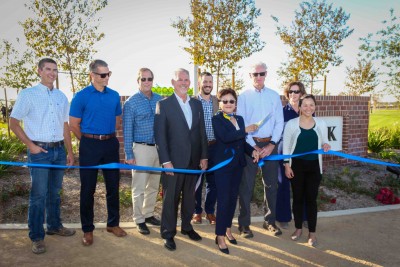 City officials, Seven Oaks residents and other community members gathered for a ribbon-cutting of the new 8.3 acre Belcourt Park in Seven Oaks, developed by Woodbridge Pacific Group and Bolthouse Properties, on a warm, sunny Friday afternoon.
"Thankfully there's no dust," joked Dianne Hoover, director of the Bakersfield Recreation and Parks Department.
The new park includes a large multi-use sports field, tennis courts, an amphitheater, a shaded tot lot and play area, picnic areas, three large covered play structures and restrooms.
A pond will be added to the north side of the park in the future.
Though it is privately funded, it is open to the public, making it the only one of its kind in the city. Woodbridge Pacific Group, Bolthouse Properties and the Belcourt Homeowners Association will maintain and operate the park.
Construction began January 2018, and the total cost was $2,181,901.
"They made a great park that everyone can enjoy," Hoover said, referring to the two developers. "We have been waiting a long time for number 60."
Woodbridge Pacific Group President Todd Cunningham said the park could be a spot where residents organize a variety of activities, such as concerts or Fourth of July celebrations.
One homeowner, Jennie Klassen, said she is excited about all the possibilities having a new park in the neighborhood will bring.
"We've come here to play baseball, to practice," Klassen said, about her two young children. "I envision this as a place to meet friends and neighbors."
The park is the newest addition to Belcourt's paseos and trails. Construction of additional homes will begin later this month. Other projects will include a walking and bike trail leading to the Kern River Parkway Trail, the Belcourt Village commercial center, road construction completion at White Lane to Allen Road and improvements to Allen Road south of White Lane, Cunningham said.
Having several amenities available in one spot gives the neighborhood the "work, live, play" title, according to Klassen.
"We love the concept to bike or walk to restaurants and stay within the neighborhood," she said. "It's going to be a fun place to live."
According to Open Line Public Relations, 272 homes of 292 released for sale since November 2016 have sold at Belcourt.
Visit http://belcourtsevenoaks.com/ to learn more.

See online article at https://www.bakersfield.com/news/bakersfield-celebrates-opening-of-its-th-park/article_6000365a-fd03-11e9-8b91-53dc92bc196b.html
Back to Media Coverage
Copyright 2021 Woodbridge Pacific Group, LLC. The improvements, amenities, information and materials described herein, are intended to provide general information about proposed plans of the developer and are subject to change or cancellation at any time without notice. Renderings and depictions are not to scale, and are an artist’s conception of proposed future development of the property depicted. Home design, materials, features, amenities, and/or prices may change without notice. Land uses are conceptual only, subject to government approvals and market factors. Prior to execution of any agreement, you should obtain and review the California Final Subdivision Public Report and the project documents. No Federal Agency has judged the merits or value, if any, of this property. Equal Housing Opportunity. Models do not reflect racial preference. All square footages are approximate. Woodbridge Pacific Group, LLC is the general contractor and project administrator. All sales activity requiring a California broker license is conducted by Muirlands Real Estate Group, Inc. CA RE License 01949603.