Open To The Possibilities 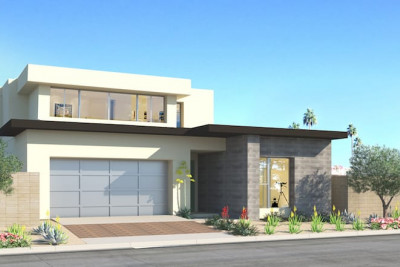 It takes a bit of imagination to see how more than 100 acres of land, including an abandoned golf course, can be turned into a homebuyer’s paradise. But creating just such a vision is exactly what Freehold Communities, a master-planned community developer headquartered in Boston, has been conjuring up in North Palm Springs.

Palm Springs Life previewed the development, Miralon, in 2017 when Freehold Communities had first begun to revive a prior residential project that was halted due to the economic downturn of 2008.

“We purchased Miralon in early 2016 and immediately began the process of replanning the site with an eye towards creating a broadly appealing, environmentally conscious project,” says Freehold California Division President Brad Shuckhart. “To that end, Freehold explored several alternative uses for the land previously built as a golf course, eventually settling on a series of resource-efficient olive orchards that, when mature, will create beautiful, shaded vistas interspersed with miles of hiking trails, while also providing residents with useable olive oil pressed from the fruit grown onsite.”

The orchard and ornamental landscaping — part of over 90 acres of open space —have now been installed and The Club, which is the centerpiece of the project’s amenity package, is currently under construction. Freehold has also chosen three homebuilders to develop the initial residential neighborhoods: Woodbridge Pacific Group, Gallery Homes, and Christopher Homes.

“All three builders have a track record of delivering quality homes in the desert and beyond,” notes Shuckhart. “Further, each of the initial builders shares a common vision for the project and is committed to making it the premier master-planned community in Palm Springs.” He adds that Freehold expects to welcome other guest builders to Miralon as the community progresses.

The amenity center, known as The Club, will include a fitness studio and homeowners will also enjoy Pilates sessions and outdoor yoga classes.

Buyers should be able to begin touring model homes in early 2020 and the project will be constructed in phases. Initial home closings are expected in the first quarter of 2020, while the buildout — which will eventually be comprised of 1,150 units — is anticipated to occur over the next several years. The majority of the lots at Miralon will accommodate optional pools, but there will also be two large pools and an oversized hot tub at The Club.

“Miralon is envisioned as a resort-like community taking inspiration from the modernist traditions of Palm Springs,” says Shuckhart. “The approved architectural guidelines reflect simple, yet sophisticated designs often found in the work of the some of the city’s most celebrated midcentury architects.” The homes have also been designed with energy conservation in mind and each will include a standard rooftop solar system and passive shading solutions such as trees and significant overhangs.

To see the complete article online visit https://www.palmspringslife.com/miralon-palm-springs/
Back to Media Coverage
Copyright 2021 Woodbridge Pacific Group, LLC. The improvements, amenities, information and materials described herein, are intended to provide general information about proposed plans of the developer and are subject to change or cancellation at any time without notice. Renderings and depictions are not to scale, and are an artist’s conception of proposed future development of the property depicted. Home design, materials, features, amenities, and/or prices may change without notice. Land uses are conceptual only, subject to government approvals and market factors. Prior to execution of any agreement, you should obtain and review the California Final Subdivision Public Report and the project documents. No Federal Agency has judged the merits or value, if any, of this property. Equal Housing Opportunity. Models do not reflect racial preference. All square footages are approximate. Woodbridge Pacific Group, LLC is the general contractor and project administrator. All sales activity requiring a California broker license is conducted by Muirlands Real Estate Group, Inc. CA RE License 01949603.